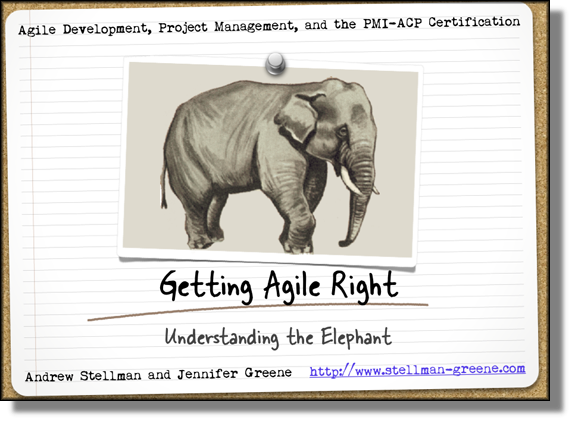 Last week Jenny and I gave our new talk, Getting Agile RightÂ [pdf], for the first time. We’re really excited, because it also marks our first public announcement of our current book project for Â Oâ€™Reilly:Â a new book about agile development and project management. It’s aimed at people preparing for the PMI-ACP certification, but our goal is to help anyone who’s interested in agile really understand the ideas behind it.

We talk to a lot of teams and help Â them understand whatâ€™s gone right and wrong with their projects, and look for common patterns of project problems and failure (that’s what our Why Projects Fail talkÂ [pdf] is all about.) People starting with agile often us about something that we call â€œbetter-than-not-doing-it results.â€ Basically, they adopt a bunch of great agile practices, and they see a clear improvement. It was definitely worth going agile, but something feels a little hollow about it. They were expecting the â€œastonishing resultsâ€ and â€œhyper-productive teamsâ€ that theyâ€™d read about in agile books and blog posts, but there’s a feeling that at its core, the team hasn’t really changed how they do things, they just made incremental improvements.

I recently read Lyssa Adkinsâ€™ excellent book, Coaching Agile Teams, and one of the really insightful things she points out is that â€œmetaphor is a powerful thing.â€ Jenny and I put a lot of thought into coming up with a good metaphor to help explain whatâ€™s going on. We hit on a really good one: the story of the blind men and the elephant. I like the Jain version of the story (from Wikipedia):

A king explains to them:Â “All of you are right. The reason every one of you is telling it differently is because each one of you touched the different part of the elephant. So, actually the elephant has all the features you mentioned.”

So what does this have to do with agile teams having trouble getting past better-than-not-doing-it results? 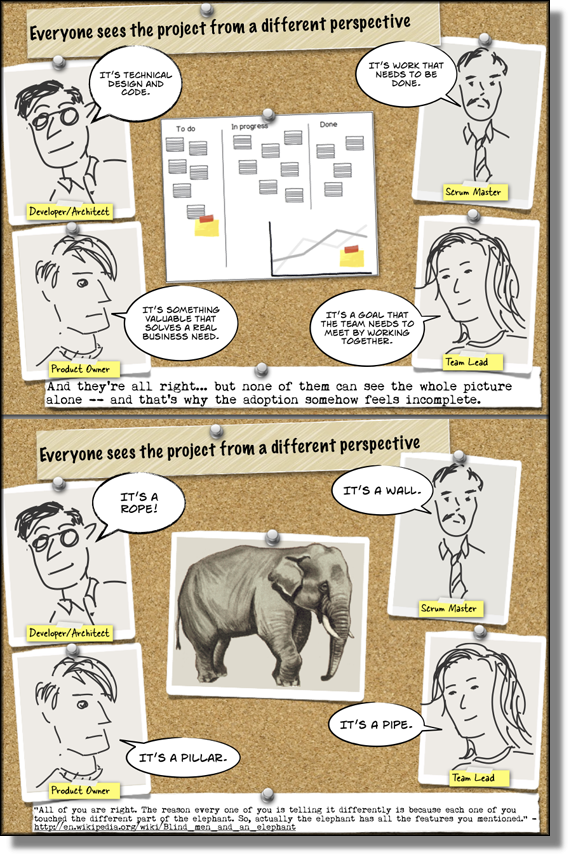 Teams that get better-than-not-doing-it results from agile are often the ones who were already able to get software out the door reasonably well before starting with agile, and were hoping that agile adoption would help them get a real improvement. The problem is that before the team started adopting agile practices, they were experiencing problemsâ€”not the serious, software crisis problems that caused their projects to fail outright, but problems that caused friction and discomfort on the team. The source of these problems is something that we call a â€œfractured perspectiveâ€: the developers think about developer stuff, project managers think about project manager stuff, and they throw the code over the wall to a business user who thinks about business stuff. Everyone is really busy thinking about his or her own project work. There isnâ€™t a lot of communication between people, and theyâ€™re really functioning as individuals working separately towards compatible goals, not as a team.

That’s where the Blind Men and the Elephant story comes inâ€”it’s a good metaphor for how a team with a fractured perspective adopts agile. Each person sees the practices that impact his or her work. Developers concentrate on, say, test-driven development, refactoring, and automated builds. Project managers like task boards, project velocity, and burndown charts. Business users use release planning and user stories to get a better grasp on what the team is doing. Team leads use daily standups and retrospectives to manage and improve the team. Everybody wants something different from the project, and they each see a few practices that do something specific to help them.

And thatâ€™s definitely going to improve things, because agile practices are generally really good. The problem is that since everyoneâ€”developers, project managers, business users, and team leadsâ€”sees the project from a different perspective, theyâ€™ll concentrate on only those practices that immediately appeal to them. Thereâ€™s a paradoxical effect (we call it, â€œSee! I was right all alongâ€) where each person now sees only the part of agile that affects his specific project work, and draws the conclusion that agile is all about getting everyone else to come around to his point of view. 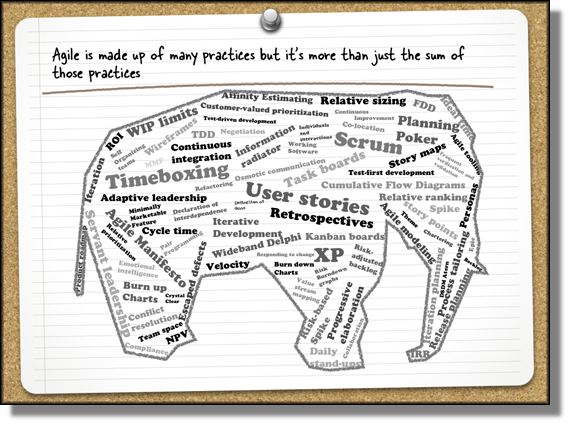 But agile is more than just practices. In fact, thatâ€™s one of the core ideas behind agile: principles over practices. So while the agile â€œelephantâ€ is made up of many great practices, the whole thing is greater than the sum of the parts. And if you only see practicesâ€”especially if youâ€™re only looking at the practices that directly affect your project workâ€”then youâ€™ll only see one small piece of agile. The â€œelephantâ€ of agile is made up of the practices day to day, but itâ€™s much bigger than just those practices.

A team whose members only see the practices and donâ€™t think about the principles will miss out on the important interactions between people. Their perspective stays fractured, and they stay separate and donâ€™t really function as an effective team. Theyâ€™ll still get their work done, but they miss out on the great team interactions and collaboration that make agile really work.

This is built into agile. If itâ€™s been a while since youâ€™ve had a look at the agile manifesto, open it up again and have a look at the very first value:

Individuals and interactions over processes and tools

Processes, methodologies, and tools are still important (â€œâ€¦while there is value in the items on the right, we value the items on the left more.â€). But even more important than specific practices are the individuals and interactions. Itâ€™s these values, and the twelve principles, that show us how the practices work together, and serve as a guide for how teams adopt those practices.

That’s one of the lessons of our â€œGetting Agile Rightâ€ talk [pdf]. Itâ€™s also going to be one of the big themes in our upcoming book, due out from Oâ€™Reilly next year, about agile development, project management, and the new PMI-ACP agile certification. Weâ€™ll continue to make posts to help connect these dots and learn more about agile.