It’s a pleasure (and relief!) to announce that after almost two years of work, the third edition of Head First C# is in print and available in bookstores. Head First C# is one of the most effective books on the market for learning programming with C#. Many thousands of readers, some new to programming and others with experience with other languages, have used the first and second editions. And now here’s the third edition, hot off the presses:

This was a major update of the book. The biggest challenge was finding an effective way to teach XAML. XAML is a fantastic tool for building robust user interfaces, but a lot of developers find that it has a pretty steep learning curve. The Head First C# approach has been to use Visual Studio as a learning, teaching, and exploration tool, and the improvements that the Microsoft IDE team made to the visual designer made it especially effective for teaching XAML. We decided to have the book dive straight into XAML design and exploration, and have the reader build a video game right in the first chapter:

The trick to really getting over that XAML learning curve turned out to be going back to WinForms development for a few chapters. WinForms is an older technology, but it’s much simpler to understand. This let us lay down a solid foundation of C#, .NET, and object oriented design concepts, which makes XAML a lot easier to learn. It also gives the reader the opportunity to build projects to solve the same problem in both WinForms and Windows Store (or WPF) using XAML. Seeing the same thing done in more than one way is one of the most effective methods for learning programming, and we’re able to take advantage of that many times throughout the book.

I hope you’re as excited about this as we are! If you’re looking to learn C#, whether you’re new to programming or experienced with another language, you should definitely have a look at Head First C#.

We’ve worked with O’Reilly to make the first three chapters available for free as a PDF. 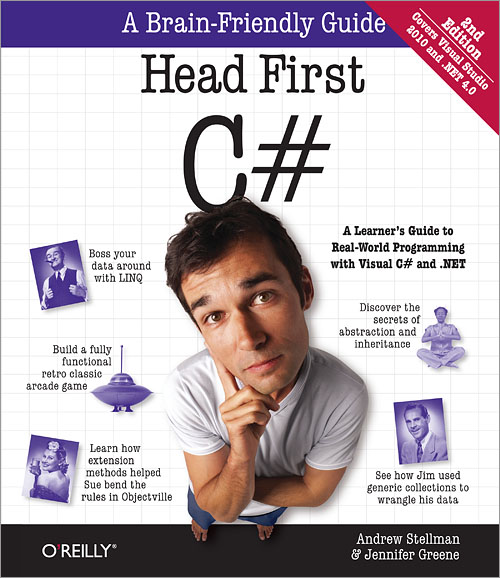 Jenny and I are really proud to announce that the second edition of our bestselling C# learning book, Head First C#, went to press! We worked really hard on it, and we’re very happy with how it came out.

Are you looking for the easiest way to become a great C# programmer? If want to get productive fast with C#, .NET and Visual Studio 2010, then this is the book you’re looking for. We show you how to learn C# by building over 100 different projects—including lots of games!—and solving dozens of puzzles.

Head First C# is a complete learning experience for programming with C#, the .NET Framework, and the Visual Studio IDE. Built for your brain, this book covers C# and .NET 4.0 and Visual Studio 2010, and teaches everything from inheritance to serialization.

But don’t take our word for it! Download the free Head First C# eBook [PDF], which includes the first three chapters, complete. Or have a look at this typing game project [PDF] from chapter 4 to get a preview of the kinds of projects you’ll build throughout the book.

So check out Head First C# today, and see what the buzz is all about! Available now from O’Reilly, and wherever fine books are sold. 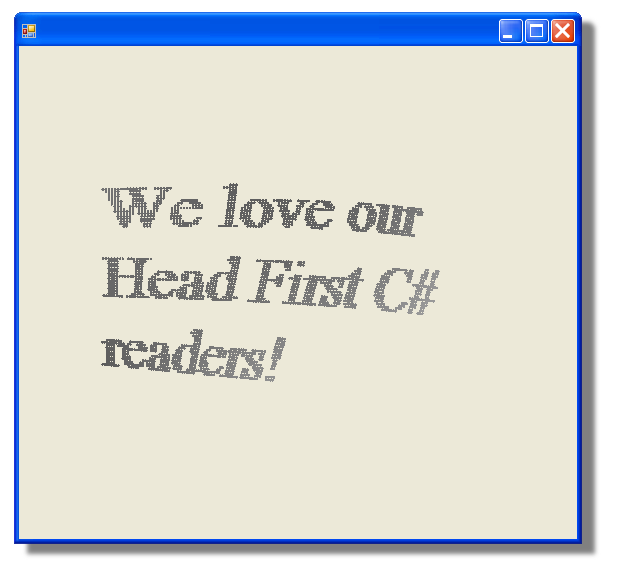 Check out this post on the Head First C# forum. One of our readers, Styrkar, wrote a really neat program that takes any text and turns it into a nifty little animation. He did it as a way to extend the Space Invaders Lab to make a cool animation for the “Game Over” text.

Okay, I just want to say how cool that is. When we wrote Head First C#, one of our goals was to give readers a starting point for their creativity. I figured we’d see a few little modifications to the programs in the book. But seeing stuff like this… well, it’s just really amazing to me. Not only is this a cool program, but the code is really good. It’s readable, efficient, and easy to follow. And it’s even well-encapsulated — it’s good object oriented design! I really hope Styrkar gets the rest of the lab finished — I can’t wait to see how it comes out.