â€œGrand principles that generate no action are mere vapor. Conversely, specific practices in the absence of guiding principles are often inappropriately used.â€ 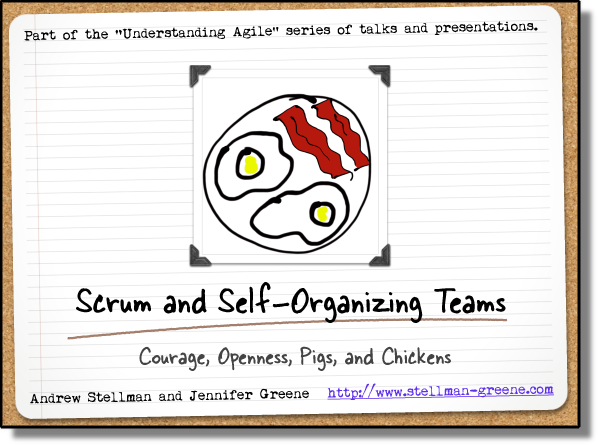 The board game Othello has the slogan, â€œA minute to learn, a lifetime to master.â€ This applies really well to a team thatâ€™s learning Scrum. The basic practices and mechanics of Scrum are straightforward, and not difficult to adopt. This is why many teams use Scrum as a starting point for going agile.

The basic pattern for a Scrum project is simple, which makes it very attractive for teams who want to go agile. And if that were all it took to adopt Scum effectively, we’d all be running great agile teams! But many teams find that they run into trouble with their Scrum adoption, and usually end up with what feels like an “empty” implementation. We explore this in our new talk, Scrum and Self-Organizing Teams: Openness, Courage, Pigs, and ChickensÂ [pdf]. 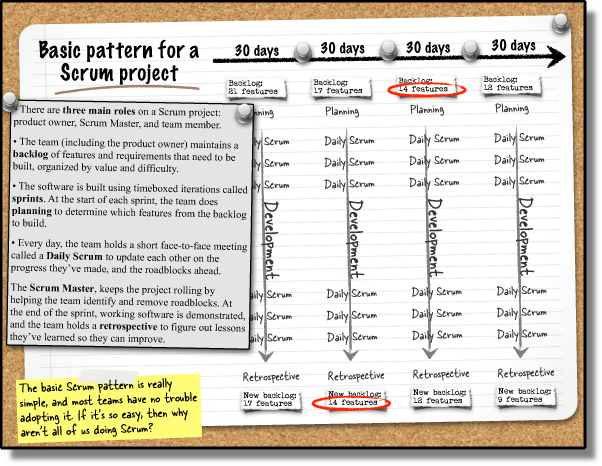 For a Scrum team to become effective, they need to do more than just follow the basic Scrum pattern. Effective Scrum teams are self-organizing, as Ken Schwaber explains (note the phrase that we emphasized):

For Scrum to work, the team has to deeply and viscerally understand collective commitment and self-organization. Scrumâ€™s theory, practices, and rules are easy to grasp intellectually. But until a group of individuals has made a collective commitment to deliver something tangible in a fixed amount of time, those individuals probably donâ€™t get Scrum. When the team members stop acting as many and adopt and commit to a common purpose, the team becomes capable of self-organization and can quickly cut through complexity and produce actionable plans.

The goal of this talk is to help teams â€œget Scrumâ€ by building on the practices and patterns of Scrum, and through those practices show the ideas behind the principles of collective commitment and self-organization. 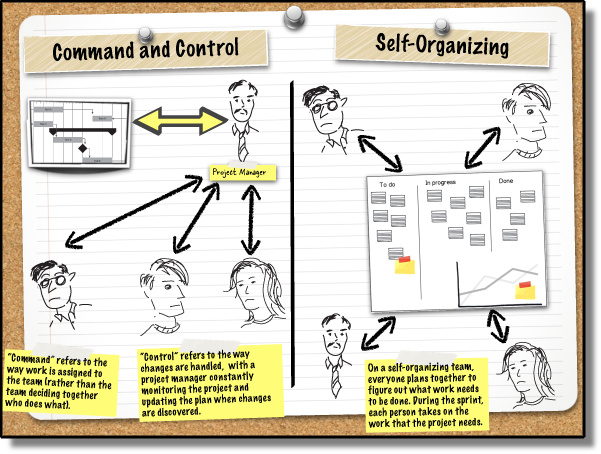 Â Self-organizing teams work differently than command-and-control teams because they have different values. Understanding self-organization starts with learning how these values are practical things that can be incorporated into your projects:

Every company has its own culture that includes specific values. For example, some companies value separation of duties, where each person has their specific role to play, and is protected from having to be accountable for things that they canâ€™t easily influence or control. Other companies value transparency, where information is shared freely and even low-level employees can influence management decisions. Neither of these is the â€œrightâ€ way to run a company. Every individual company has a culture that evolves over time, based on the way itâ€™s managed and the decisions that are made.

Every methodology has values built into it. Specific agile principles are often tied to (or implemented by) individual practices, and that those practices are an effective way for a team to bring each principle to the project. A team in a company that reserves decision-making for managers only will find it difficult to truly commit to projects. The same goes for any value or principle: if they clash with the companyâ€™s values, it presents a barrier to adoption.

But in a company where the culture matches the agile values and principles, an agile team will be much more successful than a command-and-control team. (This is one of the sources of the â€œastonishing resultsâ€ that some agile teams report.)

You might be surprised at just how well the agile values and principles match your companyâ€™s culture. A good first step in introducing agile to your company is to talk about the values, and how they might impact your companyâ€™s culture. If you find that your agile adoption runs into trouble, finding the mismatch between agile values and company culture can help you smooth out the transition (or at least help you feel better by understanding why things went wrong).

So how would you build courage on a team? How would you get a team to believe in themselves, and believe that Scrum will not only help them build more valuable software, but that they company will see the value in their new methodology?