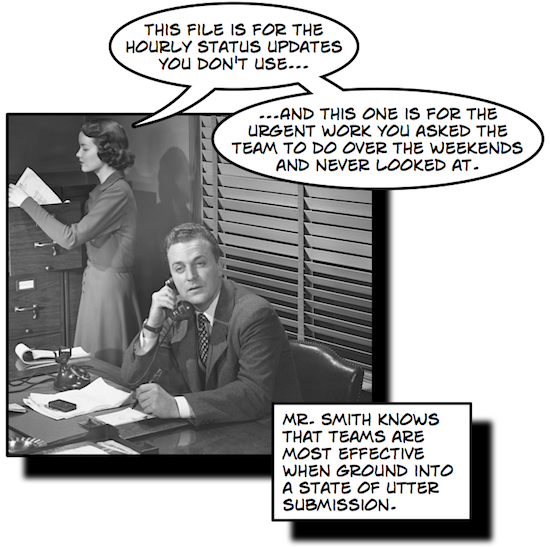 Apparently Iâ€™ve earned the dubious distinction of having become an expert in project failure. Iâ€™ve always had an interest in project failureâ€”Jenny and I have been doing our â€œWhy Projects Failâ€ talk for years now, and weâ€™ve talked to many people in many different industries (like in our fourth book, Beautiful Teams) about whatâ€™s gone wrong on their projects. Weâ€™ve looked at failures on projects through the years, from small misfires on our own projects to dramatic failures like the Tacoma Narrows Bridge disaster, to try to figure out what software developers can learn from them.

One of my favorite ways that projects can fail is death by micromanagement. Itâ€™s a nasty, insidious problem for a couple of reasons. Itâ€™s easy for a boss to fall into the micromanagement trap, especially for a project thatâ€™s starting to spiral out of control, because when you feel like your project is slipping away from you, itâ€™s hard to resist the urge to tighten your grip on every part of it that you can.

And the people on the team have trouble recognizing it because a lot of them have never worked any other way. Iâ€™ve said it before, and Iâ€™m sure Iâ€™ll say it again: Iâ€™m willing to bet that if someone was able to conduct an accurate survey, they would find that a surprisingly large number of managers are micromanagers.

Most of all, though, remember rule #1: Nobody is ever allowed to make mistakes! If a developer makes a mistake, it reflects badly on you, and the whole team suffers. Never admit that you were wrong about anything. If you said it once, itâ€™s now the law and should never be questioned.

If you follow this simple advice, then your team will be demoralized in no time. Also, theyâ€™ll hate you. Oddly, though, thereâ€™s a good chance that they wonâ€™t get their resumes together and start looking for new jobs. I have a theory about this: when you micromanage a team, it drains their will to such an extent that they no longer care. Psychologists call this state â€œlearned helplessness.â€Â  The Wikipedia article on learned helplessness has a good description of a classic experiment by Martin Seligman and Steve Maier:

If reading about the Group 3 dogs reminds you of work, then thereâ€™s a very good chance that youâ€™re being micromanaged.