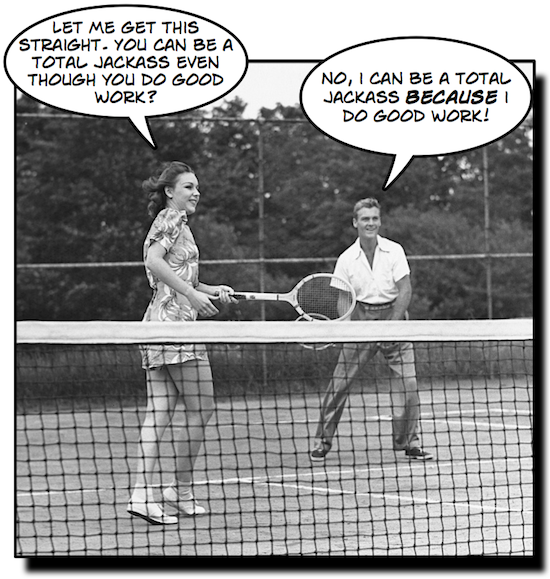 The other day I made this short, shameful confession in response to a Slashdot story about a Forbes blog post called When Smart People are Bad Employees. The post outlines three distinct types of bad employees. The third one was called â€œThe Jerk,â€ and it sounded eerily familiar:

I was that really smart programmer that everyone listened to because I made really good software really quickly. But people hated dealing with me because I was obnoxious to deal withâ€”and worse, I knew it and was openly arrogant about it. If snarky geek t-shirts had been around at the time (this was back in the mid-90s) I would definitely have worn them. When someone was wrong, I definitely let them know. If I didn’t respect someone, I would make myself unpleasant to deal with, enough so that it was easiest to just shut up anytime I was in the room.

I was a kid in my early 20s, and it was only my second job out of college, so I was really eager to prove myself. I came up with some pretty ingenious solutions to a couple of vexing problems. It was a small company, and one of the systems I built produced an entirely new product for their salespeople to sell to clients. They had some serious problems managing client information for their help desk, serious problems where their programming team wasnâ€™t able to track bugs properly (these were the days well before tools like JIRA and Bugzilla were cheap or free), and managing large amounts of data. I built some pretty good tools, and they made a big difference. So people put up with my attitude, because it was a net win for everyone. But it made their jobs more difficult, just so I could engage in some personal ego gratification.

Actually, here’s something from that time that I find really funny. The company I was working for had all prospective employees take a Caliper Assessment test as part of the interview process. At the time, it was basically a combination of an IQÂ  (abstract reasoning) test and a personality profile, and the results were compiled into a report with a page of scores and a two-page writeup. My boss gave me a copy of my results when I came on board. My abstract reasoning score was 100%, and scores on the â€œextrovertedâ€ and â€œego-drivenâ€ scales were both over 90%. The writeup said that I would be â€œa loose cannon,â€ but if I was â€œaimed properly, I would knock down any barrier in front of me.â€ It also warned that I would not play nice with people who I did not respect.

So, first of all, kudos to the folks at Caliper. They definitely had my number, which was pretty impressive considering that it was based on a 100-or-so-question fill-in-the-bubble timed test.Â And they got that profile exactly right.

This all presented a really frustrating problem for the people at the company. Here I was, this kid who kept hitting projects out of the park. But I was truly impossible to deal with. I would barely let people finish sentences before cutting them off (â€œOkay, I know exactly what you want. You go away now.â€) I perfected all of the programmer stonewalling tricks to get people to stop asking me questions: interrupting people with pedantic questions before theyâ€™d barely started getting to the point, sending people back with half-answers so I didnâ€™t have to think through the question I was being asked, answering questions in a way that was obviously far too technical for whoever I was talking to so. And heaven help anyone who said something to me that was technically inaccurate.

I was belligerent to people around me. I was definitely immature and naÃ¯ve. But people respected me and knew that I was worth dealing with, because I did really good work.

Unthinkingly, I felt that I needed to be a jerk to make people respect me. I think, on an intuitive level, that it was a kind of litmus test. People had to respect me, because if they didnâ€™t respect me they never would have put up with my attitude. But what I found was that when I stopped acting like a jerk, people still respected me. Not only did they stop fighting me, but they actually went out of their way to help me.