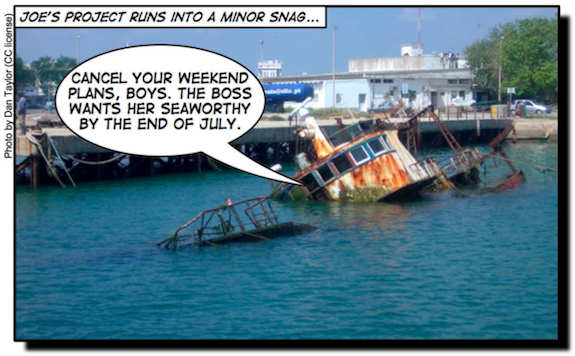 Why you should care about project management

I’ve had a lot of developers over the years tell me outright that they think project management is stupid.

Some of the best developers I’ve worked with had pretty negative opinions of project management. At best, they’d say something like, “Well, that sounds good for another team, especially a really big team, but our projects run just fine without the extra overhead.” At worst, they think it’s malignant bureaucracy imposed on them by pointy-haired bosses. One bad experience can sour a good developer on project management. And that’s pretty unfortunate, because good project management can make a developer’s life a lot easier.

So why should a developer care about project management? I think the answer is in the Why Projects Fail talk that Jenny and I have done many times over the years, where we outline many different ways that projects fail. We got the idea from that presentation because we’ve spent years talking to many different people about the different kinds of project problems. We had to figure out exactly what it means for a project to fail. Obviously, if your project completely crashes and burns, it’s a failure. But the funny thing about a software project is that you can almost always deliver something – even on a project that everyone agrees is a failure, you’ll have code that compiles and runs.

So we came up with this definition of project failure:

When we go through these things, we always get a lot of head-nodding, especially from developers. More importantly, we’ve never met a single professional software engineer with more than a few years of experience who hasn’t been on at least one failed project. We always ask for a show of hands to see if there’s anyone who’s never had a failed project. And we’ve yet to meet anyone who has. (We did get someone who raised his hand once, but I talked to him afterwards, and he was just messing with us.)

What does this have to do with project management? Well, everything! Have a look at a typical project management textbook, and you’ll learn about the “triple constraint” (which some people call the “iron triangle”) of scope, time, and cost. 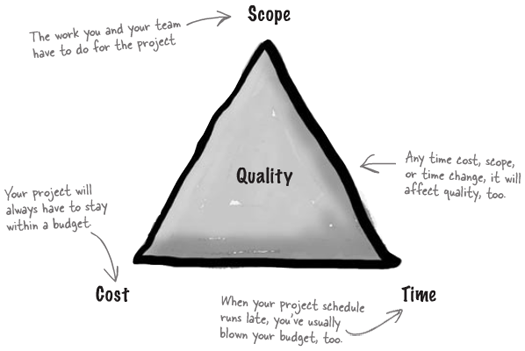 Project management really boils down to managing that triple constraint: balancing the scope of the work to be done, the cost of doing the work, and the time it takes to get the work done, all in order to get the best quality that you can. If you do that right, your project runs well, and your team is happy. If you do it badly, your project stinks, and you end up with a failure. And that’s why you, as a developer, should care.

I’ll go into a little depth about each of those things – scope, time, cost, and quality – just to give you an idea of why you should care about each of them. But the one that developers care about most is scope, so I’ll spend a little more time on that first.

Scope: the work and features that go into the project

I’m consistently amazed by how much work a project team can put into a project without before they realize they’ve got a scope problem. Jenny and I talked about this in our book Applied Software Project Management in the section on scope problems:

A change in the project priorities partway through the project is one of the most frustrating ways that a software project can break down. After the software design and architecture is finalized, the code is under development, the testers have begun their preparation, and the rest of the organization is gearing up to use and support the software, a stakeholder “discovers” that an important feature is not being developed. This, in turn, wreaks havoc on the project schedules, causing the team to miss important deadlines as they frantically try to go back and hammer the new feature in.

Does that sound familiar? If so, talking about the scope earlier in the project can really help. One way to help fix this is to put together a Vision and Scope document. It’s a really simple document, usually only a page or two, but it can really help prevent scope problems. It’s also a staple of project management. Once in a while, I’m pulled into a project that’s been running into trouble. I’ll spend a few hours talking to each of the team members, managers, and anyone else I can find who knows something about the project or needs it done. I’ll throw together a quick vision and scope document, and what I’ll often find is everyone had very different ideas of what would actually get built. And it’s usually a big relief, because everyone – especially the lead developers! – realizes that they were going down a path that would have had them waste a lot of time building the wrong software. 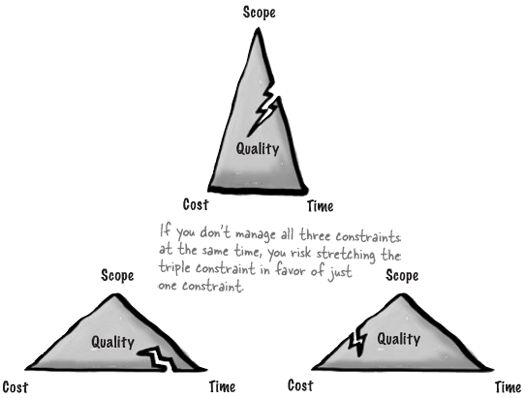 There’s a whole lot more that I’m tempted to write about managing time, cost, and scope in order to get to the right quality level, but I really want to pare this down to the basics. There’s an old (and somewhat cynical) project management saying: “faster, cheaper, better: pick two.” What it means is that there’s no way to reduce cost, shorten the schedule, and increase quality all at the same time. At least one of those things absolutely has to give.

But there’s a reason that’s a saying and not a law! All three of those constraints are related to each other, and there’s almost never an easy, obvious trade-off where you can sacrifice one to improve the other two. If there were, project management would be a lot easier. It’s really easy to fall into a trap of trying to do the impossible, but the first step in avoiding a trap is knowing that it’s there. In this case, just knowing that every project is a balancing act between scope, time, and cost is a really good first step in making sure your project ends up running well.

I wanted to leave you with just a couple of thoughts: