We don’t always get to choose our teammates, especially at work. So what do you do when you just don’t get along with someone on your team? 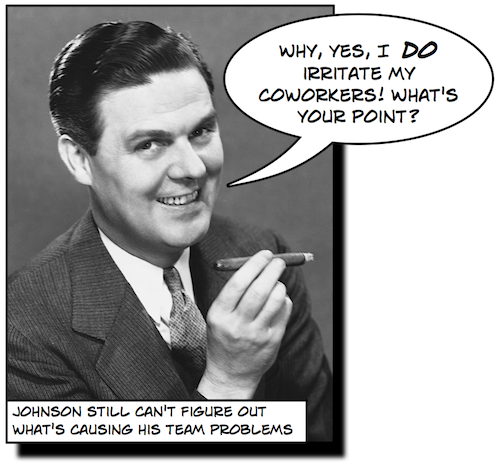 Not too long ago, I was doing our Beautiful Teams talk at a brown bag lunch for a big financial company here in New York. At the end of the talk, I got a really good question:

What do you do when you’re on a team with people who don’t get along?

We don’t get to choose our teams, and while I’ve been on plenty of teams that gelled really well, I’ve definitely had to work with people who just rubbed me the wrong way or, worse, where the feeling was mutual. It’s a tough problem, but one that should be really familiar to anyone who’s been working with teams for a long time.

I have to admit that while I’ve had success working on teams with people who didn’t get along, there have definitely been a few times when I didn’t handle that situation as well as I could have. Luckily, those are the situations where we learn the most.

That’s actually one of the main reasons Jenny and I wanted to talk to Andy Lester when we were talking to contributors for Beautiful Teams. Andy runs a great website called The Working Geek, where he talks about working life for programmers, sysadmins and other geek types. And he had some really interesting things to say about how people interact with each other â€” especially geeky types (like me), since we seem to be especially prone to interpersonal problems. (Imagine that!)

I really liked this quote from Andy, because I think it cuts to the heart of the matter:

I was on a team once where I said, “At the very least, can we just have minimal respect for everyone here?” And I was asked quite seriously by someone else, “Well, what if not everybody on this team is worthy of respect?” And that’s baffling to me as a human, but it’s also not uncommon. And that minimal amount of respect is something that many just don’t get.

He’s right. When I look back over my own career, I find that many of my own conflicts with people on my team stemmed from a basic lack of respect. Since I was the top programmer on the team, I thought I knew better than everyone else about everything. Once someone got something wrong technically, I’d write that person off entirely because they didn’t have my respect.

Andy offers some really good personal advice for getting past those problems, both in his Beautiful Teams chapter and on his blog.

But I wanted to go a little further than that, because sometimes interpersonal problems aren’t going to be repaired. The person who asked me the question was in this situation: when I asked him about it, it sounded like some of his teammates were simply never going to get along with each other. So what do you do about that?

As it turns out, the answer I gave him comes from another part of Beautiful Teams. When Jenny and I were putting it together, we put a lot of thought into how to divide it into sections. And so many people talked explicitly about setting goals for projects that we ended up including an entire section called Goals.

So my answer to anyone who’s got insurmountable (at least, in the short run) conflicts between team members is to make sure that you’ve established what many of our contributors referred to as an “elevating goal.”

One of those contributors was Steve McConnell, who also happens to be one of my favorite authors. We asked another one of our favorite authors (and an old friend of mine), Scott Berkun, to interview him for the book, and out of that interview came this great quote:

If youâ€™re out digging ditches, thatâ€™s not very elevating or inspiring. But if youâ€™re digging ditches to protect your town thatâ€™s about to be attacked by an enemy, well, thatâ€™s more inspiring, even though itâ€™s the same activity. And so the leaderâ€™s job, really, is to try to determine or frame the activity in such a way that people can understand what the value is.

I think that really cuts to the heart of what it means to establish an elevating vision, and it should help show why that can help get past serious team problems. I have to admit that before working on this book, I hadn’t really given that much thought to establishing a vision. Yes, establishing a goal for a project is important, but I always thought about it in terms of the work that had to be done. I’d generally dismiss anything like an “elevating vision or goal” as a business-speak buzzword. A really valuable lesson for me was just how important it is to get everyone on the team on board with that one singular vision â€” and I mean actually understanding and embracing the vision for the project, and not just agreeing to some sort of lame mission statement.

What’s especially useful about getting everyone on the team to see the same vision is that you don’t need to be a manager or team lead to do it. All you need to do, minimally, is talk to people on your team. I’ve been brought onto projects where people on the team thought that there were serious architecture or requirements or quality problems. But once I started I talking to people, it turned out that everyone had a completely different idea of what they were building and why they were building it. I’ve found over and over again that just writing down what we’re building and who we’re building it for (using a Vision and Scope Document, for example) is enough to help the situation. It’s uncanny how often I’ve heard people say something like, “Wait, we’re building what? I thought we were doing something completely different!”

Anyone on the team can do that, and it’s a really valuable tool to help with serious teammate problems. The clearer everyone sees the real goal of the project, the easier it is to get past the disagreements and arguments and get on with the work. It’s something I’ve seen in real life many times, and it really does work: people are much more willing to settle disagreements and just get down to business if they can see that there’s a real end that they’re working towards.

When I look back at the times where I was able to successfully navigate serious team problems that were caused by people who didn’t like each other, I can see how this is exactly what I did. Even when people didn’t get along, I found that if I was able to get each person to see the bigger picture and work towards something he or she believed in, then most of the time they were able to put their problems on the back burner, at least long enough to get through, say, a meeting or a code review. And that was enough to save the project.

2 thoughts on “When team members hate each other”