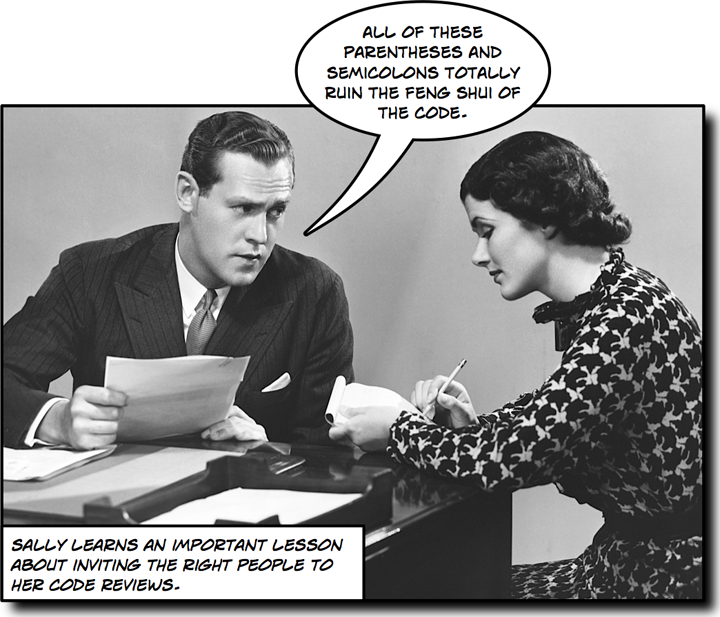 A lot of programmers feel like being asked to go to a code review is like being told by mom to eat our veggies. We’ll complain about it, and even if we do eventually swallow them we’re determined not to enjoy them.

It’s something I’ve seen over and over again: programmers groaning about having to go to a code review, usually because someone gets some big idea about making things better, and decides this is how you do it. There’s sometimes a little nervous joking at the beginning of the meeting about how nobody really wants to be there. And after it’s done, a lot of us get the distinct feeling that it was a waste of time.

The thing is, code reviews can be a really good thing. And not only that, they don’t have to be a chore. If you do them right, people on the team can start to appreciate them and even – heaven forbid – enjoy them.

So how do we make code reviews more palatable? We need to think about what motivates us as programmers. Programmers love to code. We love building things, and we love solving problems. But we hate anything that seems bureaucratic or tedious, and we definitely hate meetings. But most of all, we hate being in uncomfortable social situations that require us to confront people face-to-face. We’re not alone in that; most people hate situations like that.

I think that’s a pretty big part of why programmers intuitively dislike code reviews. It’s not that we’re afraid of putting our work out there for our peers to see. That’s actually something we look forward to: we love to show off code that we’ve worked so hard on, and we definitely appreciate the input from the people around us. But it’s almost never the person whose code is being reviewed who groans about it. No, it’s usually the people who are asked to attend the review. And I think I know why: it’s because we don’t like being asked to criticize the work of others, openly and without hesitation, for the good of the team. I think we naturally feel uncomfortable putting someone else in the position of having to openly confront their errors, because it’s so easy to imagine ourselves in that same position.

And that may be the secret to holding code reviews that people actually look forward to attending: make it about helping make the code better, not criticizing and finding its flaws. If you can come up with a way to avoid bitter arguments about tiny details and stubbornly-held opinions, and instead concentrate on helping someone improve his or her code, then people will stop thinking about code reviews as an uncomfortable meeting and start thing about them as a way to build better software.

That sounds like a tall order. How do you do it?

Well, you start out by thinking about one of the best things that can happen in a code review, something that I’ve seen many times. It usually happens about two thirds of the way through the review, about the time when the first signs of meeting fatigue are starting to set in. Someone points out another problem with the code, and a conversation starts up about an aspect of it that nobody really thought of. Uh-oh — it’s a bug, a particularly nasty one that. Then everyone kind of looks at each other with a weird mixture of relief and disgust, because we found a bug that a) definitely would have made it into production, and b) would have taken hours or days to track down and fix.

I’ve said this many times before: programmers are very practical people, especially when it comes to our own time. If something will save us time down the road, we’ll definitely do it. If you can show a programmer that a tool or technique (like a code review) saves more time than it costs, that’s a great way to get him or her to start thinking positively about it.

That doesn’t change the fact that a lot of people get nervous about code reviews, even people who have done them a bunch of times. So I spent a little time thinking of advice I’ve given about code reviews over the years. Some of this is pretty standard code review stuff, but I think it’s worth repeating because people have so many different views on how to do code reviews effectively. And I think that if you think about them, and get other people on your team thinking the same way, it could definitely help you hold effective code reviews.

So here’s some advice about holding better code reviews — you can think of them as code review tools (or even code review best practices, although I’m not a huge fan of that term) that can make your software better:

When Jenny and I were writing the section on code review techniques in our first book, Applied Software Project Management, we came up with a checklist of things that you should look for during a code review. That should give you a good starting point for coming up with a good review.

Good luck with your code reviews! If you end up with a good code review success (or failure!) story, I’d love to hear about it.

2 thoughts on “How to hold a more effective code review”