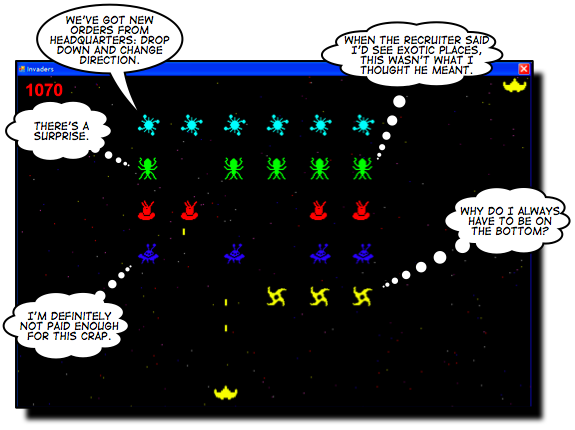 One of my favorite things about Head First C# is that Jenny and I ask our readers to do a whole lot of coding. When we started doing research for the book, one thing that really struck me about other books to help you learn C# was that I couldn’t find any book that actually asked its readers to write much code. There were one or two that we saw which had some written Lose Weight Exercises. And that’s great for a textbook, but I don’t know any programmer who learned to program with a pencil and paper. If you want to be a good programmer, you need to write a lot of code. Coding is a skill, and like any other skill it takes practice. And there are a lot ofÂ concepts that just don’t “click” until you write software that uses them.

We’re running a little contest for our readers. We’ve included three labs in the book where the readers build larger projects. We give them a lot of design, but we don’t actually give them the code for the solutions (like we do for all of the smaller projects). Eventually, we want to post executables for the labs. But we don’t want to post our own — we want to post executables that our readers came up with! So we’re running a contest to see which readers can send in executables first. The first person to send us working code for the lab will have their executable posted on the website as the official solution, and we’ll send them some sweet O’Reilly swag, too.Â  Here’s the contest page — we’re looking forward to seeing what our readers come up with!